skip to main | skip to sidebar

I scored 2/5 at the Manhattan Open 2014 edition at the Wyndham New Yorker Hotel. The highlight of the tournament was my miracle draw vs IM Jay Bonin in the first round. My score vs Jay is nothing to write home about to say the least. My only other memorable game was a gift draw vs the IM when I was about a 1500 player. ( He offered that draw to claim clear first. ) After the game, Jay was kind enough to sign my score sheet: 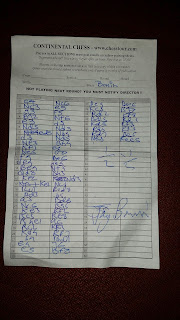 The game itself was quite interesting as I more or less gambitted the opening and was almost checkmated before move 20. The rest of the game was mostly about holding on for dear life and hoping for some defensive chances.
The tournament of course would not be complete without some opportunities for further study and improvement. Plenty of that was provided by my last round game vs Janak Awatramani. Thanks for the lesson kid. Now I gotta make heads or tails of it.
Posted by Kubiyak at 5:48 PM No comments:

My Take on Malaysian Airlines Flight 370

I have been riveted to CNN for the past two weeks trying to get every scrap of news on the missing Malaysian Airlines flight. This type of thing brings out the Sherlock Holmes in me and I've been developing my own theory of what may have happened.
As search after search for the missing flight turns up fruitless, I'm won over to the idea more and more that Malaysian Airlines flight 370 did not crash. Given that planes don't crash very often and that there's no shred of evidence that the plane crashed at all, I believe I'm justified in suggesting that the aircraft landed somewhere absent evidence to the contrary.
If the above is the case, then where did the plane land? It is unlikely to have landed very far from Malaysia. A Boeing 777 in Malaysian Airlines livery would be quite conspicuous outside Malaysia, but would not be out of place at all at any of Malaysia's larger airports. There's no better place to hide a Boeing 777 in Malaysian Airlines colors than in Kuala Lumpur's airport, or in one of Malaysia's other larger airports which regularly receives larger Malaysian Airlines aircraft.
How could the plane get there undetected? One possibility is that after MH370 dodged out of radar range, the pilot(s) switch the transponder to the transponder code of some special non-scheduled flight and then landed back at one of Malaysia's airports.
Why? Possibly to discredit the current government of Malaysia.
Where are the passengers? Ok, I admit this is the hard part. I don't have a good scenario other than that the passengers are in some way complicit in this plan. Finding the plane itself is the key to the mystery and some effort must be expended to verify that the plane in question is not in fact sitting on the tarmac or in a hangar somewhere in a Malaysian airport.
Posted by Kubiyak at 7:00 PM No comments:

Today I'm the proud owner of a loss from a "dead drawn" Rook+3 vs Rook+2 with all pawns on one side endgame. As I don't want to be such an owner again, I have decided to investigate the details of drawing this endgame all the way down to the possible Rook+1 vs Rook positions. Actually I think I played the position correctly for quite a while but that's clearly not good enough. So here's the theory:
Quite amazingly I lost as White in this position.

This just goes to show that chess is not easy. It's hard to get a sense of how to continue this type of position for 20 moves or more from grandmaster games because ( except for Carlsen! ) GMs generally take a draw here.
I'm going to play this out vs a computer until I can convincingly hold the draw here as practice. I will post the result when I have it.

Now here's how I should have played that:

While I'm on the topic I'm going to investigate some of the key drawing ( and winning ) ideas in the Rook+1 vs Rook ending as well. As GM Melik Khatchiyan points out in his excellent rook endgame video set on chess.com, it's not enough to know the theory in these positions. It is important to actually play out the positions to get practice vs a computer or a training partner.

This position happened during the game. I don't have all the moves to the ending but I found myself in this marginal situation after trying to play too actively. This is clearly the wrong strategy in an inferior rook ending of this type. As it turns out, this position is still a draw with correct play. I almost worked out the key idea but not quite and I lost.

Posted by Kubiyak at 7:38 PM No comments:

Central Pawns as Compensation for Material

Sometimes pawn(s) are not needed as additional compensation for the positional justification of an exchange sacrifice apparently.

Posted by Kubiyak at 5:12 AM No comments:

I don't usually play into this line preferring to transpose to QGD lines. My main interest is in the pawn sacrifice that White often employs in these lines. Obtaining, maintaining and then extending compensation for a pawn is one of my joys within the joy that chess is to me.

Posted by Kubiyak at 9:48 AM No comments:

GM Li Chao You Have a New Fan

This interview / game review by GM Li Chao of China is really refreshing. All strong players improved by studying their losses. It's rare to see a GM analyzing a game they lost and with such good humor. Kudos to you Li Chao, this author is now a fan. GM Li Chao Analysis
Posted by Kubiyak at 8:58 PM No comments: